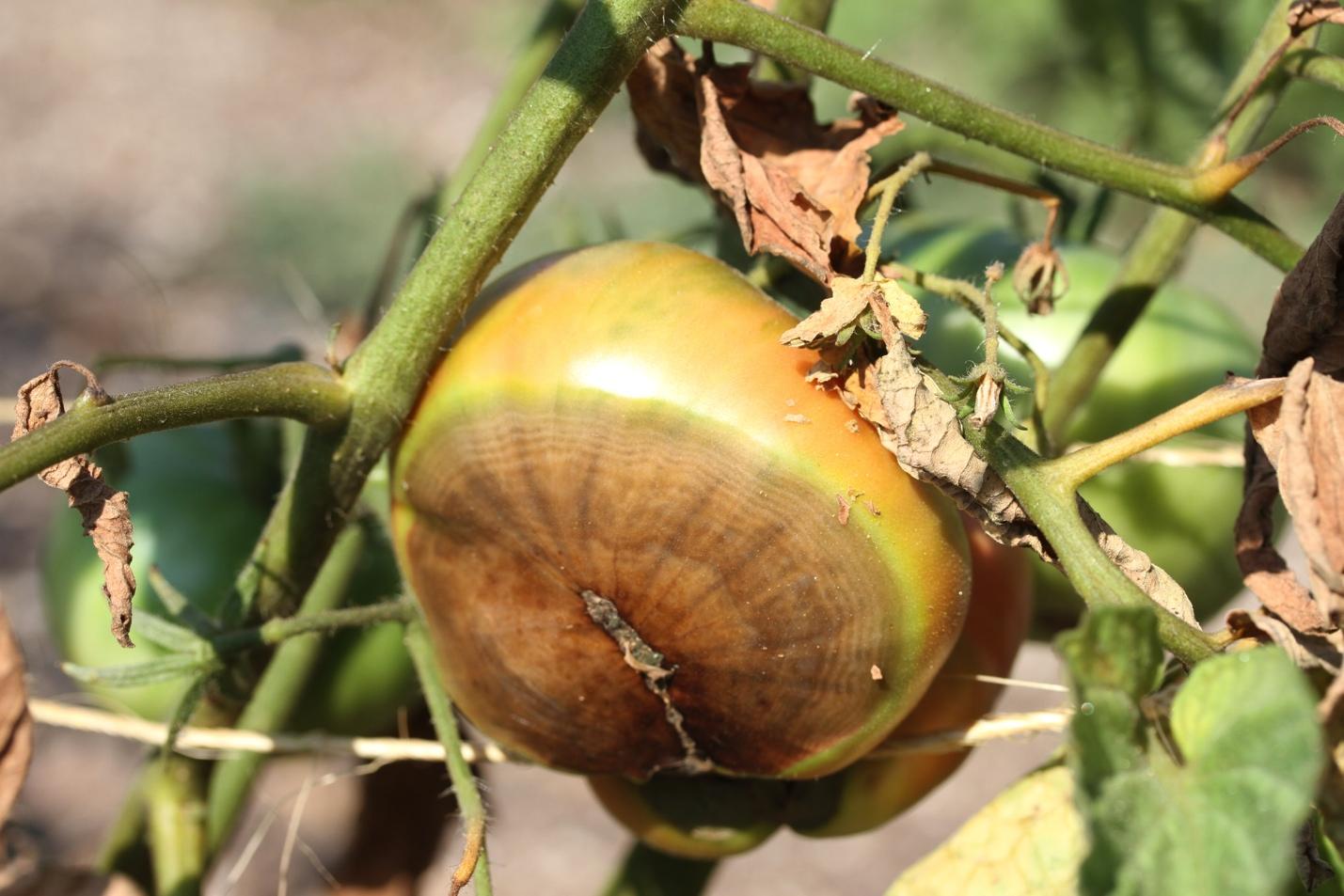 A large, leathery black spot that forms on the bottom of tomatoes is a common issue, particularly among heirloom varieties. It’s called blossom end rot and you’ll certainly know it when you see it. Blossom end rot results when a plant that is deficient in calcium. The plant obtains its calcium from the soil but the nutrient level in the soil is almost never to blame. Uneven watering is usually the issue in the home garden – the soil is allowed to become too dry before more water is applied… Tomato plants have a difficult time obtaining calcium from dry soil and the black spots at the blossom end of the fruit are the result. The unaffected areas of the fruit are completely edible and usually quite tasty. The blackened bit is edible too but I’m not sure that you’d like to eat that.

Uneven watering can also cause the skin of tomatoes to crack. This issue arises when nearly-mature fruit hangs on a vine growing in dry soil. When tomatoes are almost ready to pick, the skin begins to thicken and become less elastic. Applying water to a drought-stressed plant results in rapid uptake of water and swelling of the fruit. When nearly-mature fruit swells its inelastic skin can’t expand quickly enough – thus the cracks.

Tomatoes will tolerate dry soil but prefer consistent moisture. I can’t recommend a watering schedule since weather conditions and soils are so variable but providing consistent moisture is easy. Simply water whenever the soil begins to dry at a depth of 1 inch. Consistent moisture and moderate fertility will have you buried in delicious fruit.

Next up in our “Late Summer Woes in the Kitchen Garden” post series, powdery mildew. Stay tuned!

Hello from The Jonathans! We’ve been away for a

Join The Jonathans of Table & Field tonight at the

What’s better than home made bread, fresh from t

Come to our upcoming Sunday Family Dinner at @full

Happy 4th of July from Table & Field! Wishing you

Our Tailgating & Picnicking class is coming up at

Thank you to everyone who came out tonight for our

Some shots from our Mother's Day Brunch event this

Join us this Mother's Day, May 14th, for a truly u

Beautiful fresh pasta is being made tonight at the

Reserve your spot now in our upcoming Easter dinne

Thanks to everyone (all 67 of you!!) that came out

Next Wednesday, March 29th at 7pm, join The Jonath

Next Thursday, March 9th 2017, The Jonathans of Ta

Happy Valentine's Day from The Jonathans of Table

The perfect end to the perfectly romantic meal: @d

Classic and fabulous pumpkin pie finishes off our